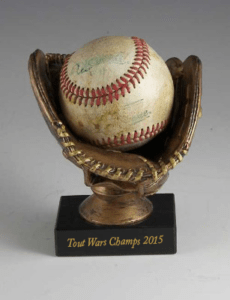 The league names link to the final standings.

Congratulations all! See you in March!

“If the entire final month left me seasick, the final weekend made me schizophrenic. In fact, it almost made me jealous of the fantasy writers who cover both baseball and football, as I would have had a healthy distraction. Almost. By the halfway point, Pat had taken the overall lead and I was staring down the barrel of what would easily have been my worst period of the entire contest. A week later, my luck had turned and my offense started hitting–pushing me to a 5.5-point lead overall and a little more comfort, which would hold until the final lineups were set on Friday. From that point on, my team’s performance became irrelevant, as Pat’s team was absolutely firing on all cylinders. My lead was down to one at the end of the day Friday and gone by the evening games on Saturday.”

You can read Bret’s story at Baseball Prospectus. It’s on the free side of the paywall. 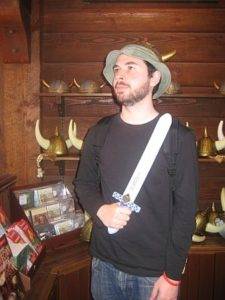 Going into the last four week set of Tout Wars X at Shandler Park, Bret Sayre had a 14.5 point lead over Patrick Mayo. But in the game’s final period, Mayo quickly jumped out to a lead, a lead he didn’t relinquish all month. On same days he moved into the overall lead and he won his second month of the competition, but in the end he fell short overall by three points.

Here are the final overall standings (click to enlarge):

Mayo’s 62 points were the most for any one-month winner, but it was not enough to overcome Sayre’s sizable lead. Sayre and Mayo, notably, had no months in which they scored fewer than 40 points, the only players not to, and Sayre’s final margin of victory was also the difference between his worst month (5) and Mayo’s (1).

Bret says: “My goal was to shoot for a safe 45 points and if Pat scored 60, I’d tip my hat to him for a job extremely well done. It turns out he certainly earned that hat tip, but I was fortunate enough to squeeze out 50 points again, despite not having my SB safety blanket in Billy Hamilton.”

Five months, five games, and Bret Sayre leads Patrick Mayo by 14.5 points in the race for the 2015 Tout X championship.

That happens to be identical to the 14.5 point lead that Sayre had over Mayo at the end of Game 1. The two have, ever since, traded blows from month to month, playing it even overall.

In fact, the high scorer in the four games since the opening draft on Tout Weekend has been Doug Anderson, who has managed to climb up into third place despite a disastrous opening frame. His 213.5 points over the last four games edges the 211.5 that Sayre and Mayo have posted.

You can see the whole leaderboard here.

Anderson trails Sayre by 31 points, slightly less than the lead Sayre opened up over Anderson in Game 1. It’s hard to see Anderson being able to close that gap in the final contest, especially since he also has to pass Mayo, whom he trails by 16.5 points. But that’s why they play the game.

Here is a link to the September Game standings.

One interesting aspect to this year’s Tout X Monthly Game is that MLB players can be owned by multiple teams. Who did the Top 3 pick this time round? 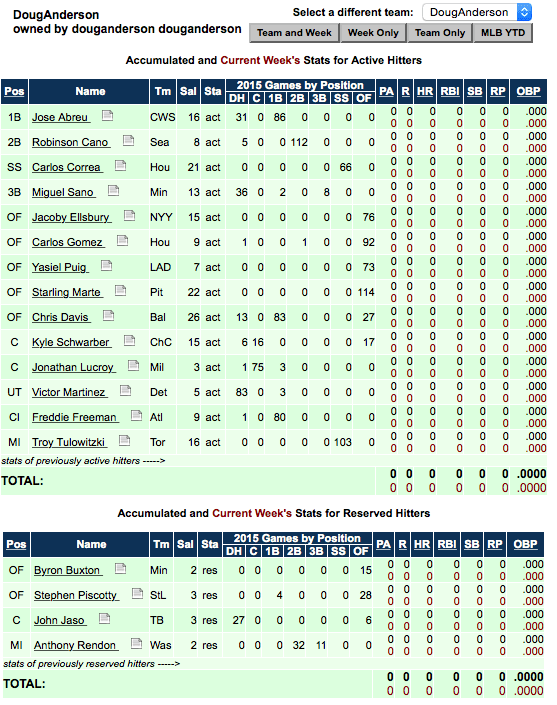 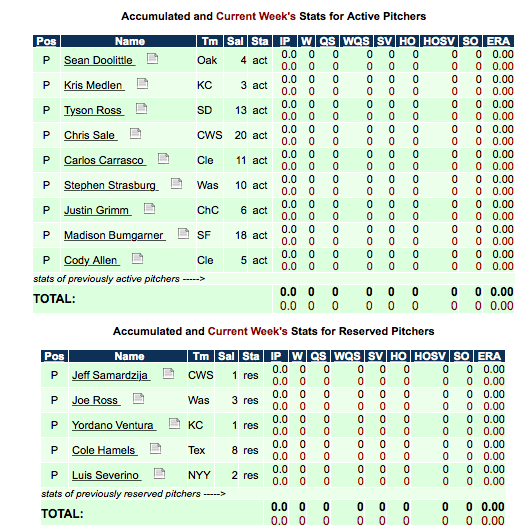 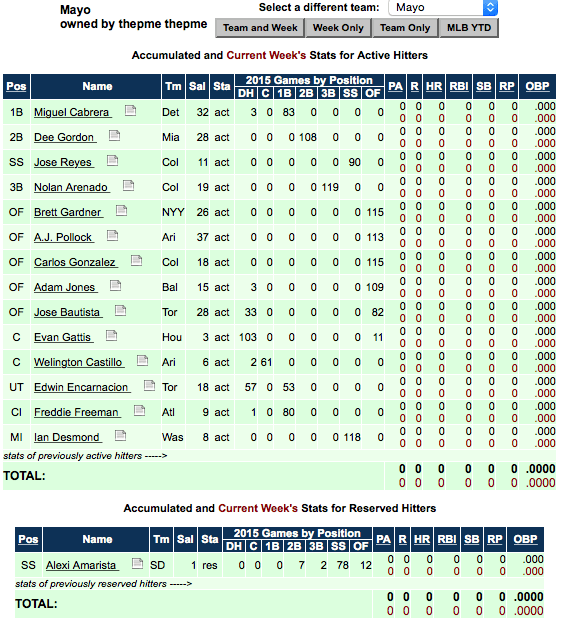 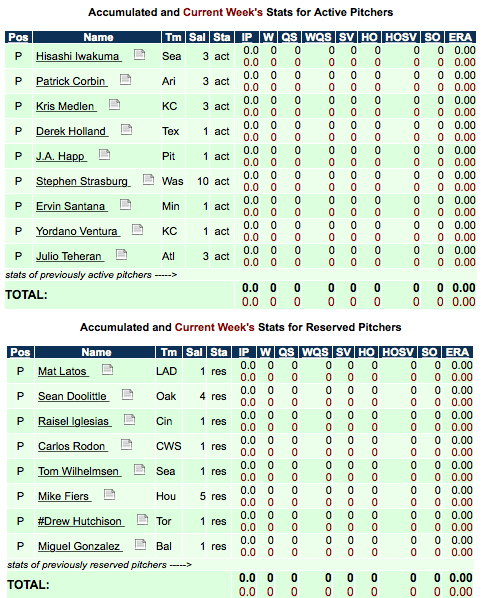 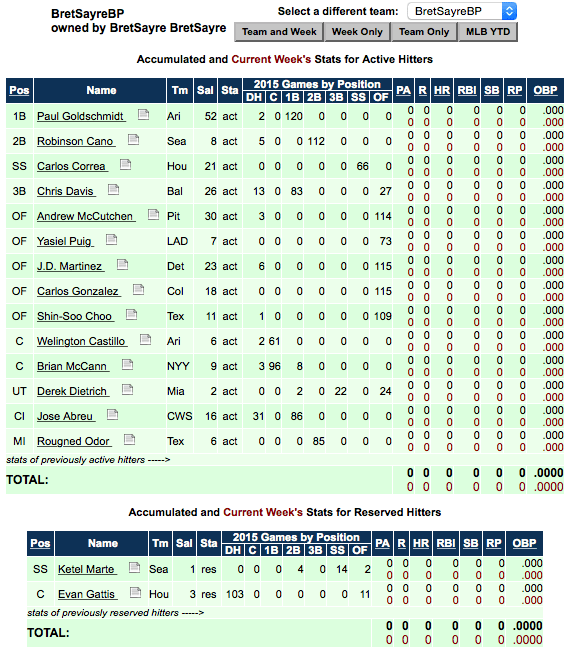 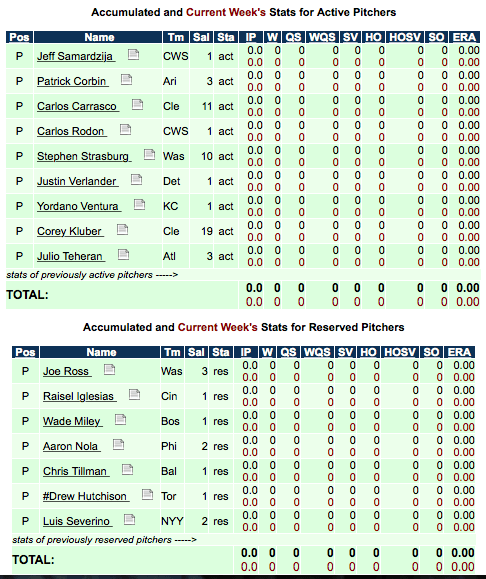 Bret Sayre may be a Dynasty Guru, but he’s shown monthly control in the Tout X game being played at Shandler Park.  In Game 4 Sayre was the first player to win two months of the game, and the only player to top 50 points all four games.

Doug Anderson has shrugged off a disastrous Game 1, and after finishing first in Game 3 finished second this past month, climbing into fourth place overall.

Patrick Mayo and Andrea Lamont have posted consistently solid scores all four games and rank second and third going into the penultimate game.

Read more about the Tout Was X game here.

Sayre spent big on Paul Goldschmidt, who had a .450 OBP but only hit one homer and drove in 12 runs. More productive was Mike Trout, with 12 homers in the four week contest, Carlos Gonzalez and JD Martinez.

Sayre’s strategy each month has been to load up on hitters and pick off cheap pitchers. His ace this month was the $16 Corey Kluber, and he didn’t spend more than 10 for any other pitcher ($10 went for Lance McCullers). Oh, and he bought no relievers.

The formula has worked, and it will be interesting if his Tout Wars X opponents adopt more of his style this month. 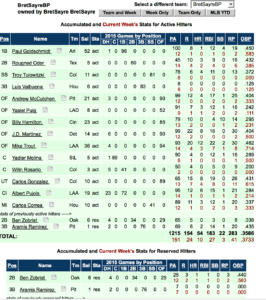 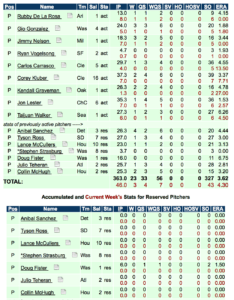 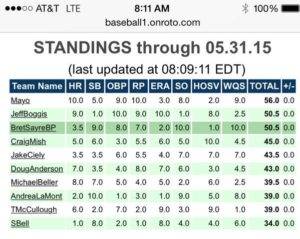 Patrick Mayo won Round 2 of the Tout X contest at Shandler Park, and climbed to within nine points of overall contest leader Bret Sayre, who finished tied with Jeff Boggis for second with 50.5 points.

Mayo also trails Boggis, who has shown consistency with  50.5 points in each of the contests two periods so far,  by 1 1/2 points.

You can access the contest leaderboard here. Learn more about Tout X here.

Round 3 starts tonight. Take a look at who each team picked and at what cost right here, when it’s posted.

Bret Sayre stayed ahead of the hard-charging Andrea LaMont to hold onto the lead after the first four-week Tout X event.

Sayre writes about how he put his May team together over at Baseball Prospectus.

Here’s how they finished after the season’s first four weeks: 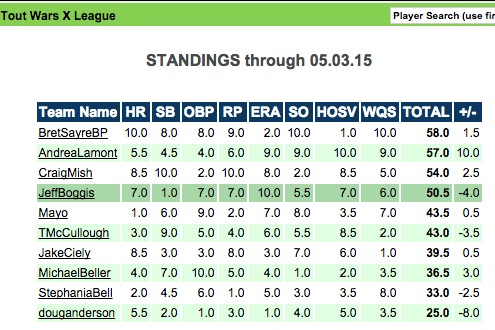 How Sayre Did It: 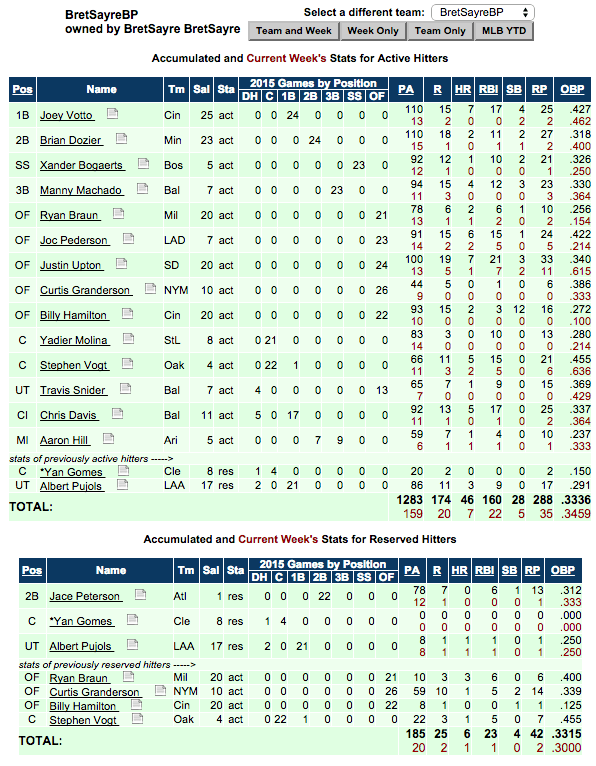 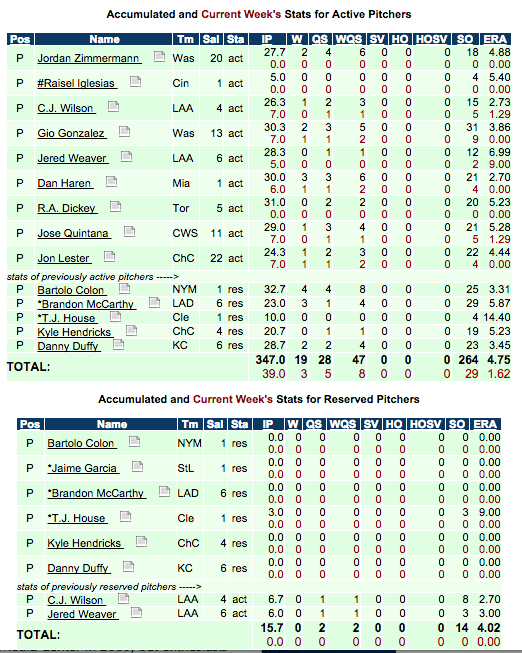 How are things going in the first week in Tout X? Lawr Michaels checks in.