Last week I explored past Tout Wars statistics in the auction leagues to see if they revealed any strategies or tactics that Tout followers could use in their leagues. This week I did the same with the Tout Wars Mixed Draft League.

First, I have to confess. Personally, I am not a big fan of drafts. I prefer auctions. If I want Mike Trout I can get him, if I am willing to pay the price. However, in a draft, one is left at the mercy of the draw. In case of the Tout Mixed Draft League, a one in fifteen chance of drawing the first pick and control of owning Trout (or another choice). Drafts are quite popular, despite my own preference, and allows for friends to have leagues while living far apart. They tend to be quicker which also adds to their popularity.

I was intrigued listening to some of the touts on XM radio and the questions they were fielding regarding drafts. Specifically, on more than one show the touts were asked if they would trade the number one pick for a pick later in the round like the number nine or number eleven pick. Upon hearing this I wondered what the Tout Wars statistical history would reveal.

Before we look at the stats, keep in mind the Tout Mixed Draft League has fifteen teams and the auction leagues only have twelve. Also, I used stats going back five years for the auction leagues and there are only four available for research for the drafts, so the sample size is a little less.

With that said, let’s look at the stats!

Below are stat tables of recent Tout Mixed League Drafts.

The first stat I looked at, again, was punting a category. Like the auction leagues the champions had no true punts (1 point in a category), but two true punts were found in the money finishes. The categories were very similar to the auction leagues where a punt might land you in the money but champs were usually well rounded teams solid in all categories. Champs only finished eight times in the bottom half of any category out of a possible forty.

One stat that does stick out here is the hitting/pitching splits. For teams that finished in the money their stat line was nearly a 50/50 split while champions saw a ten point split difference favoring hitting. Upon seeing this it led me to another question. Did the draft league show the same category tendencies for champions that the auction leagues revealed? Below is a comparison in list fashion.

A quick look reveals that auction league champions aced the pitching categories and the draft league champions the hitting. Clearly the leagues have a different approach to accumulating stats.

Let’s go back to the questions the touts were getting over trading draft slots. What does an analysis here reveal? Below are tables that break down the slots in several different formats. 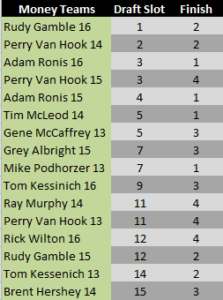 Some very interesting reveals here. The 11th & 12th draft slot has fared as well as the first and the 10-12 as well as 1-3. This is surprising. However, the # 1 pick has finished no worse than 6th in the standings. Interestingly though, no one with the #1 or # 2 pick has won the league the last four years and on the other side of the coin no one drafting 10-15 has become a champion either. Three championships have come from the 3-5 slots and seem to be the optimum positions. For whatever reason, which I will continue to monitor and research, the 6th and 8th slots have fared the worst.

The stats show that a trading down may not be such a bad strategy as it sounds. However, why trade the # 1 pick when it gives you a very good chance of being competitive and trading down only equals the production of the first spot. There is no clear advantage gained. Only break even at best.

Another questions fantasy players ask often is, “what round should I take my first starter?” “ What round do I take my first closer?,” or “my first catcher? Below is a table of that shows what round starting pitchers, closers, relief pitchers (possible closers), and catchers were selected by the champions and money finishers.

Champion Position Picks By Round 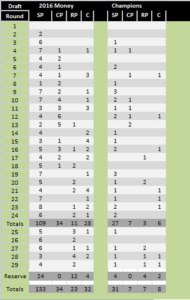 The item that stands out in this table is the fact that the earliest a champion selected a starting pitcher was round three and the bulk of pitchers were not taken until rounds 9-12. Closers followed the same pattern. While one was taken in round four and one in round seven, the bulk of closers were taken in rounds 10-13. For catchers, money teams selected them in a number of different rounds, but for champions five of the eight catchers taken were selected in round twenty one or later.

Like the auction research, there is a plethora of numbers to analyze and looking into them can reveal Tout tactics that may help you get an edge on your opponents in your leagues.